Kate and Wills got married today. There was a funny video uploaded on YouTube: The T-Mobile Royal Wedding
Wonderful.

What was also wonderful, in "OMG how people believe in all kinds of crap" sort of way, was one of the comments.
"Royal Wedding? It's nothing that I could give a shit I gotta tell you.
DOWN WITH THE BRITISH REPTILIAN ROYAL FAMILY WHO ARE RESPONSIBLE FOR SOME OF THE MOST GROTESQUE ATROCITIES COMMITTED IN 20TH AND 21ST CENTURY.
Shame on anyone who's agonizing over this crappy wedding that was orchestrated to obscure the real picture in terms of what these people are really involved in. These people have hijacked the wealth of the entire planet for their own use and you're watching their diabolical celebration? "

Obviously you give a lot more than a shit. You are screaming while commenting a joke. So... it's you agonizing over this wedding, isn't it. So - that's probably one thing I agree with you - shame on you.

Reptilian? The British royal family responsible for "some of the most grotesque atrocities of the 20th and 21st century"? Like... what?

"wedding orchestrated to obscure the real picture"... oh, yeah. Since the first British Royal Wedding with modern media coverage almost exactly 90 years ago (87 years and 3 days), there has been 7 weddings. If you give a year of excitement and interest to all of the weddings, that leaves 80 years when there has been no weddings to obscure anything. Don't you think it's a bit... I don't know... less sly, perhaps, to arrange such big things, pay a lot of money and expose oneself for countless photo opportunities by every man and their dog for something this small? I mean... I would rather let the BBC pay for the chance of broadcasting a royal dinner once a month, where only some chosen few photographers are invited and thoroughly controlled, and even the material supervised and retouched if necessary before airing, in stead of letting millions of people watch something live?

And what is it they are supposed to be obscuring with this? That they are the true Elders of Zion, not the Jews. They just made Jews into scapegoats, like Aryans always do. You see, they are the true Aryans, Lizard shapeshifters, the descendants of Alien Lizard people the ancient called angels...

Anyway... there's a lot of videos around where people are "confirmed" as aliens.

Like Britney Spears. Look at her tongue in this picture: 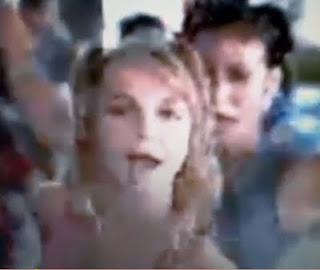 Weird, huh? Obviously she's a reptilian.
The fact that this picture is of horribly bad quality, and her reptilian tongue isn't showing at all in a good quality pictures, is totally irrelevant. I suppose the reptilians have tampered with the video, now when this little accident has been noticed. Or something. After all, Britney is so smart, pretty and ambitious she must be an alien. 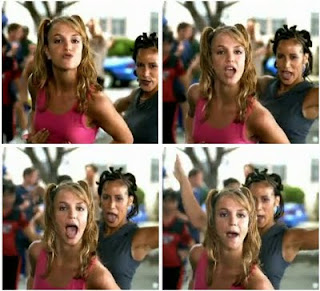 Now, this is "the video that woke the world"... this is what happens at about 35 seconds: "membrane crosses one eye only and a clicking sound"

Membrane? That's not a membrane. That's a reflection of light. I would say someone took a picture with a flash and the click was the camera.
Why in one eye only? 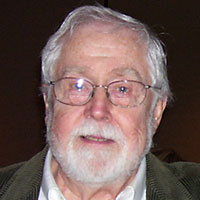 This guy is obviously a reptilian; see how the membrane crosses one glass only. I bet there was the clicking sound too... Busted!

Then there is Jennifer, the cat eye girl. Or reptilian eye... she is naturally the result of alien gene manipulation, what else? 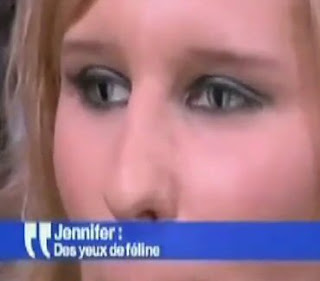 What else is that some people are born with cleft palate and in some cases with cleft pupil as well. People have been born with cleft lips, nose, eyes, ears and cheeks, and even though this is a very rare condition, it is "normal" human condition, due to "abnormal facial development during gestation".


and so on and so forth... *sigh*
This actually explains most of it; Reptilian Alien Shape-shifter Videos Explained
Read it and try to understand it, and don't dismiss it just because it pops your bubble, and your bubble was soooo pretty and lovely and... What? What is the purpose with this kind of conspiracy theories? Why do you want to believe George Bush visited regularly some woman and raped her and her 5 years old daughter? Why do you want to believe the British royal family have Satanic orgies in their cellar where they abuse children and drink their blood?
Posted by Ketutar at 5:33 PM 13 comments: