This first video is rather disturbing.


This second one is much better

Some people claim Israel is stealing the Palestinian water. Bull!

Does Israel use "Palestinian" water?

There was a research publication done by Palestinian water authorities - Palestinian, not Israeli - where the water situation was looked at from the ecological point of view. Because of how the water flows, overuse of the Palestinian aquifer - done by Palestinians themselves - is making the water salt. It's not Israel's fault, it's Palestinians' own fault. Palestinians drill wells without permission, without any consideration to these issues - in fact, they don't even care.
Also, it is insane to demand water from West Bank to Gaza instead of using the desalination plants. Nevertheless, Palestinians in Gaza have bombed the desalination plants and killed the engineers responsible for the building and maintaining these plants.

Gaza is dumping sewage into the sea

"Other major donors have continued their smaller-scale infrastructure projects. But it is the U.S. the Palestinians depend on for water and sewage treatment, says Naim El-Mani, senior technical adviser at the Palestinian Water Authority.

More than 80 percent of communities in the West Bank aren't hooked up to a sewer network, and much of their waste ends up in riverbeds, some of it running into Israel, water experts said."

"To save the aquifer, USAID was going to build a desalination plant and a pipeline to deliver the water to Gaza, but those plans were suspended after three U.S. government contractors were killed by unidentified assailants in October 2003."

Over the years, Israelis have been involved in establishing desalination plants elsewhere around the globe, in places like Cyprus, the US and China. Now Israelis, too, will benefit from the wonders of desalination technology. Those benefits may soon also be offered to Palestinians in the Gaza Strip. "We expect to be up to full production of 100 million cubic meters of water a year by the end of the year," says plant engineer Gustavo Kronenberg. "Once we reach the plant's full capacity of 120 million cubic meters a year, we'll be able to provide the Palestinian Authority with 20 million cubic meters a year. We have held talks with the Palestinians and they have expressed great interest."

Uri Schor, spokesperson for the Israeli Water Commission, said Gazans had pumped too much water out of the Gaza aquifer, with the result that sea water had seeped in and turned the fresh water salty.

"We have offered them 20 million cubic metres a year of water from our Ashkelon desalination plant. The Palestinian water people think it's a good offer but the Palestinian politicians don't want it"

“We are well aware of the close proximity of sensitive civilian (desalination plant) and military facilities to Sderot, Ashkelon and Ashdod; these sites are targeted by the organization’s improved rockets, and those launched by the other resistance groups."

I have a suggestion: 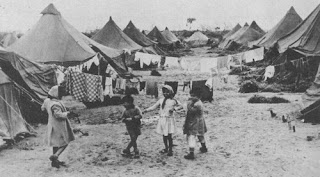 THIS is what a refugee camp looks like... And no UNRWA either >:->

The Arab countries complain about that the Jews were given the Arabic land in Palestine. The Arabs took the Jews' land in Arabic countries. What about giving this land area - 10 times bigger than Israel - to the Palestinians?

Justice for Jews from Arab countries

Palestine Facts: Why did Jews go to Israel from other Middle Eastern countries?

One of them was an interview with 80 years old man. He lived in Beit Nabala near Tel Aviv. He tells about "al Nakbah" - the catastrophe. The story is not a new one - we have heard several versions of it - and the story itself is not interesting. What is interesting is what is NOT said.

Why did Israel empty some Palestinian villages?

I have no doubt on that it happened, but the "whys" are important. Someone I have been discussing about these issues with, repeated the Pro-Palestinian/Anti-Israeli version of Israeli nationalism and European colonialism attitude, invasions and occupations - with one word; Zionism. As if there was no "real" reason for the Israeli aggression... but google "Beit Nabala Massacre"... What do you find? What? You can't find anything? >:->

On December 14th, 1947, the Arab Legion (Army of Jordan) attacked a civilian bus convoy from Petah Tikva to Ben Shemen under the excuse that the convoy was hiding a Jewish terrorist... Sounds familiar, huh?

From November 9th 1947 to July 18th 1948, Jerusalem was under "siege" by the "oh-so-peaceful-loving-tolerant-hospitable" Palestinians - no Jews were allowed in the city, the Jewish quarters were under constant attacks and threats, the Jewish hospital and university campus were threatened and so on. They were assisted by the Jordanians, Egyptians and - yes - British.

We don't even have names to all the massacres and pogroms by the Arabs towards the Jewish population, we don't even know about all the kibbutzim and villages destroyed by the Arabs and Palestinians during this siege... (It would be better if the Israeli revisionist historians would dig up THIS information from the archives and memories... but they won't. And do you know why? Because the Antisemitic Far Left is so strong within the Academic world that holocaust denials have better chances to get their findings published than non-anti-Israeli historians...)

The Pro-Palestinians/Anti-Israelis have made an industry of Al Nakbah and will drum Deir Yassin memorials and whatnots and be mute, deaf and blind to the other side...

They will remind everyone of the King David's hotel, but don't say a word about Fawzi el-Kutub (al-Kuttab, el-Kuttub...) - SS-trained Palestinian >:-> - who organized
- the bombing of The Palestine Post on February 1st 1948, killed one, injured dozens and destroyed the press bureau.
- the bombing of Ben Yehuda street in Jerusalem in February 22nd, 1948. About 50 CIVILIANS were killed and dozens were wounded.
- the bombing of the Jewish Agency for Israel in March 11th, 1948, killing 12 and wounding dozens.
- the bombing of the Tiferes Yisrael Synagogue in May 21-22nd, 1948
And others...

It is because of this situation the Israelis cleaned up the road from Tel Aviv to Jerusalem, broke through the siege and made sure the Jewish citizens of Jerusalem may live in their home town, and because of this some villages, towns and cities were emptied from anyone who could be harboring Arab soldiers, militia or terrorists.

This is a piece of information one HAS to know, consider and remember to have an informed and balanced view of "al Nakbah".

Of course no-one should be driven from one's home, but these villages were emptied AFTER the Arabs/Palestinians tried to empty the area from the Jewish population.

If the Arabs/Palestinians had succeeded instead of the Jews, the world would be quiet... just as quiet as the world has been during the millenniums of Jews being driven from their homes... Saying that a Jew can easily, without scruples or objections, be driven from his home. >:->

And do you know what THAT is? That is antisemitism, Jew-hate, pure and simple.