Guess what? You've made a feminist of me!

Not really. It turns out I have always been a feminist.

Some things have happened this week.

2) There's this... person, who brags about how she and other women like she started "#repealthe19th"

3) I came here to comment these two things, when this happened (Ketutar says so: I have been watching Penn & Teller: Bullshit - comments), which lead to that I saw the show about 12 steps, and I reacted the same way I did the first time around. "But that's not what it means!!!" But I was reminded of why I like the show, and I wanted to see more, so I saw the Cheerleader episode.
And that one is so horrible I find it hard to believe.

These young women, girls, are being treated like shit just because they are girls. They are expected to do highly advanced physical stunts without any safety precautions or covers, which makes cheerleading more dangerous than ice hockey.
CHEERLEADING IS MORE DANGEROUS THAN ANY GAME THEY CHEER. 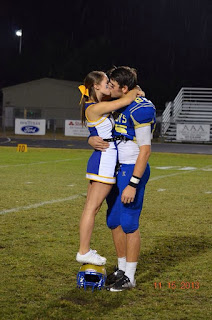 People look at this picture and see an athlete and his pretty little girlfriend.
When in reality it's she who has the more physically demanding and dangerous job
and he who's wearing all the protection.

And even though cheerleading has become more and more demanding and dangerous, and is practically something totally different than what it was in the 70s when it was decided it's not a sport, the status of it hasn't changed.
No, I don't think it's a sport, but it MUST be classified as sport to protect the girls! All these injuries, especially to the head and spine, will have serious medical consequences when they are older!
And people just think it's "basically just being pretty".

"Perhaps you should just keep your mouth shut and stay in the kitchen where you belong."

"You can't expect a guy to spend all of his time in the kitchen unless he is better than a women, which never happens"

I agree. It never happens that a guy is better than "a women".

"Yes, save civilization and repeal the 19th!"

What civilization is that?

This? "The Latest Trend In Christianity: Beating Your Wife For Jesus"

I don't think women are better than men. I think people are equal. 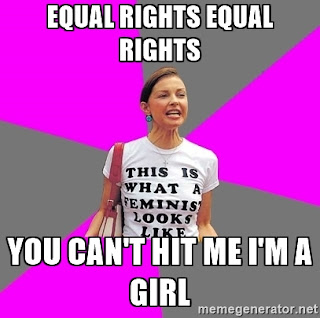 If a woman has told you "you can't hit me, I'm a girl", that means that you have wanted to hit her... and do you know what that makes of you?
Pathetic. What's the victory in beating someone weaker than you?

I have never said to anyone "you can't hit me, I'm a woman!" Because the second you hit me I know you are a pathetic loser. So you want to hit me? Go ahead and prove me right. 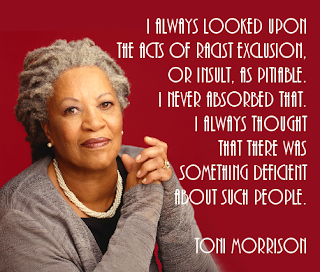 Frankly, all the "feminazi" memes are so damn stupid.


I don't expect you to pay for dinner. I'm fully capable to pay for my own food.
I am also fully capable of filling my fridge and cooking my food, too.
I expect you to be able to do the same.
Every time you say things like "women belong to the kitchen" I think you're a pathetic loser who can't even feed himself.

I don't expect you to open doors to me. I expect you not to barricade the doors either.
If you do, I know you are afraid of me.

"I just don't think they should have equal rights. Because (no offense) they're not equal."
If a woman would say that about men, you'd call her feminazi. 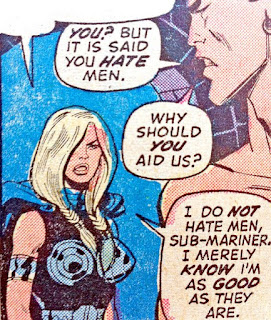 I oppose objectifying of all people, men and women.

I don't think my looks have any relevance to any of this, just as little as your looks, so if you start saying things like "they are just ugly old maids" you have obviously nothing intelligent to say. 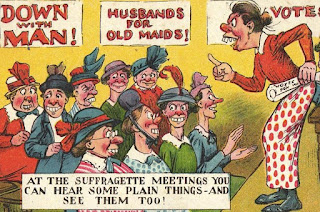 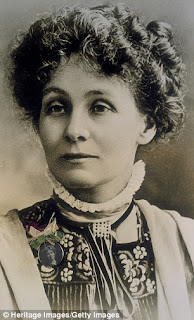 On the left is a cartoon of what idiots like to think suffragettes were.
On the right a real suffragette, Emmeline Pankhurst.
She got married at the age of 21 and had 5 children.
People who cannot separate cartoons from real life are a bit... special.
People who prefer to believe cartoons over historical facts are idiots.

"All things valuable to mankind were created by men only, thus only men can have rights to use them."

The hunters invented how to make things to hurt and kill others.

Hunters might have domesticated the animals, though it's more likely women who did that too.
Come on. You are a hunter and find a wolf pup. Would you think "oh, how fluffy and cute that is!", or would you think "that's going to grow up and eat my prey and probably my kids, too. Better to kill it now".
Or you see an orphan lamb. Do you think "oh, so cute! I want to take care of it!" or do you think "oh, food! I want to eat it!" 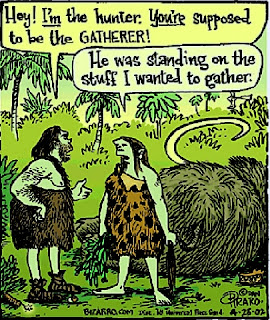 But seriously. All the references to history and how "all the inventors and influential people have been men!" claim. That just shows an incredible ignorance and understanding of society.

Firstly, women were seen as objects to own for several thousands of year, simply because we are physically weaker. Men have been writing women off the world history, diminishing our impact and influence and taking credit for our work and inventions. It's the same thing with every person not a white male.
For a very long time women weren't even allowed to study. Still in the 60s women in Universities were told they are stealing a place from a "better deserving" male, a person who would not just get married and become a mother, but would actually work. Through the whole 20th century women had to fight to prove that they are just as intelligent and capable at work as men are. But still there are people who don't believe this, without understanding the consequences of the 2000 years of slavery.
There are still people who should know better who say things like "women shouldn't be working with science, because they are too emotional and distracting men". Total bullshit!
Women weren't allowed to do certain works. Not because they couldn't have done them, they do them today with no difficulties, but because "it was believed" women couldn't do these jobs. Not even when women HAD to do these jobs - because all able-bodied men were at war - did people believe that they actually could do these jobs. Women put together all the planes and tanks and guns and bullets used to win the war, and were rewarded by people telling them they did nothing, just let men fight for them.
There were a lot of things women weren't allowed to do.

One could ask why there were no female Leonardo da Vincis, then? Or Galileo Galileis?
Actually, there were, but most weren't allowed to engage in such "manly things". Those who did it against the society were ostracized. Some were even killed for daring to do "things only men should do". Some got their work and contribution stolen. After all, who would believe a woman? Even today we have people who claim Marie Curie was "just an assistant".
These are just the women we know of. How many brilliant women were killed or forced out of the field before they managed to do anything? How many brilliant women got their work stolen by a man the society today believes is the "father" of the invention or idea? They thieves wouldn't most certainly tell. Considering today's field I am certain of that there were a lot more resources there. And just the thought of that we have been wasting all those resources because of a brittle male pride... Makes me sick!

But, I know. You can bend it from wire and paint it with fire, and people still don't get it. More stupid people.
On a Plate - a great comic strip about equality of opportunity 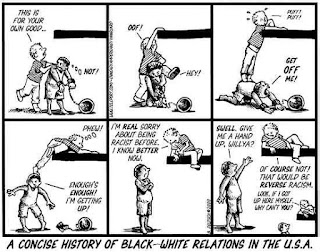 You just don't get it.

Posted by Ketutar at 3:52 AM No comments: