Did you know that wearing a scarf is fraternizing with the enemy?

Nancy Pelosi visited Syria some time ago, and while visiting a mosque, she showed some respect to the country's native traditions and covered her hair. Just the way I do when I visit a church, a synagogue, or any other "holy place" where the women are used to cover their hair. 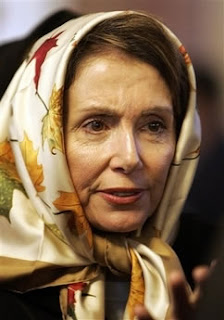 I don't do it to show any obedience to the religion or the people following that religion, I'm Pagan and happily so, and will never be anything else, I do it to show common courtesy to my fellow human beings by following their rules as long as I am in their place.

Nancy Pelosi didn't wear a hijab. Claiming that she did shows an inexcusable ignorance on what is hijab. Her hair is showing and considering that her scarf is of silk, it is rather slippery and can slide off her hair at any moment. They say she was wearing a black abaya. So what? Probably her normal dress wasn't as modest as is expected when visiting a mosque in an Islamic country, and someone found her an abaya. An abaya is a garment that covers your body except for your hands, head and feet. It doesn't MEAN anything. You are not this or that if you wear one, neither are you saying anything with it. It's a piece of clothing, nothing more, nothing less.

Besides, Islam is not the enemy. If you think it is, you are a xenophobic idiot; islamophobe and stupid as all xenophobes are.
Syria and Syria's President have never attacked USA in any way or manner. They MIGHT WANT to, but that is a totally different issue. Making people your enemies, because they MIGHT WANT to do bad things to you, puts you against the whole world. In that position, you shouldn't be wondering why "everyone hates USA". Look at yourself. It's YOU who hate everyone.

Nancy Pelosi showed only that she is not an oaf like so many other USonians, George W Bush included. Her visit to Syria and her show of respect will have POSITIVE consequences as the Syrians and everyone following her visit now know that at least SOME USonians have manners.

Some others woe about fashion designers bending at the will of Muslims, because they show silk scarves in their fashion shows... "Scarves as hijab", they cry... That too shows a saddening ignorance about hijab, but even more saddeningly THE WESTERN FASHION! The Muslims didn't invent the square printed silk scarf! Already the Romans used scarves - or kerchiefs, as they were at that time. The silk scarves were invented in China and made into fashion item in France in the 18th century. A square scarf has been part of the Western national costumes for more than 500 years.
(history of scarves)
Hermès started producing scarves - worn among others by Queen Elisabeth II, Grace Kelly and Audrey Hepburn - NOT HIJABI STYLE - 1937. The colorful, printed silk scarf is not something Islamic or medieval as some idiots try to claim. 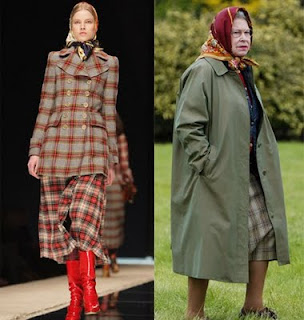 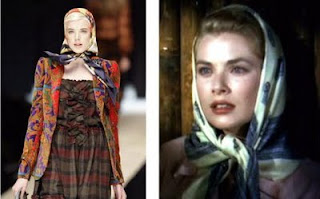 Dolce & Gabbana taking inspiration from another royalty, Grace Kelly - or Princess Grace of Monaco.
NOT HIJAB. 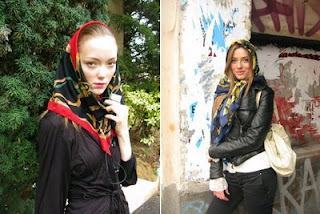 Some European girls wearing a "babushka scarf"
- NOT HIJAB!

Are you going to blame them too
for "submitting to Islam" and "fraternizing with the enemy"?
Posted by Ketutar at 10:07 AM 5 comments: